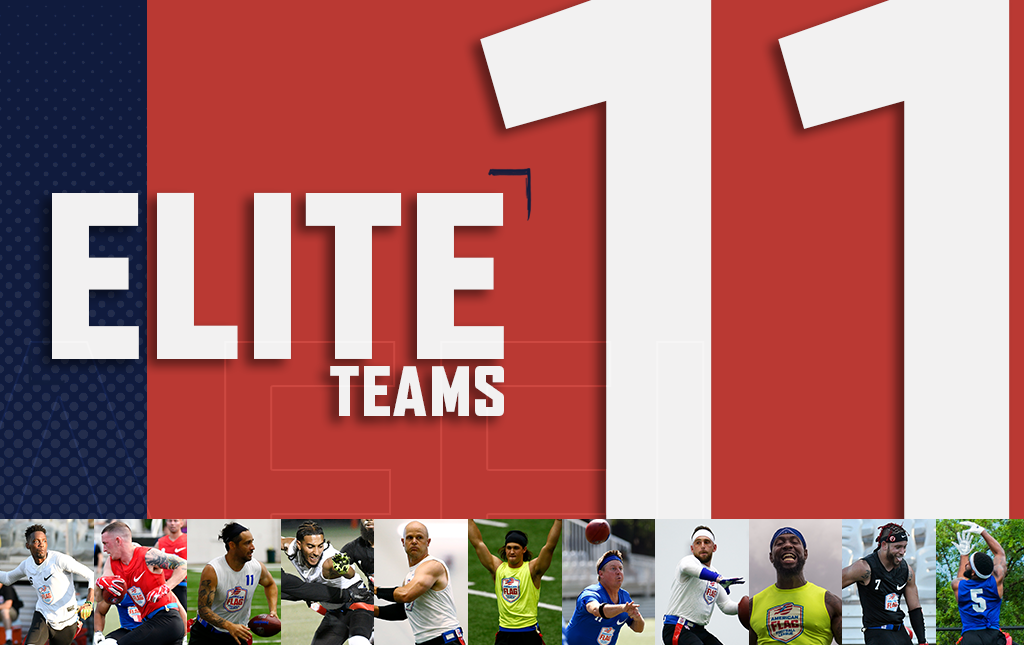 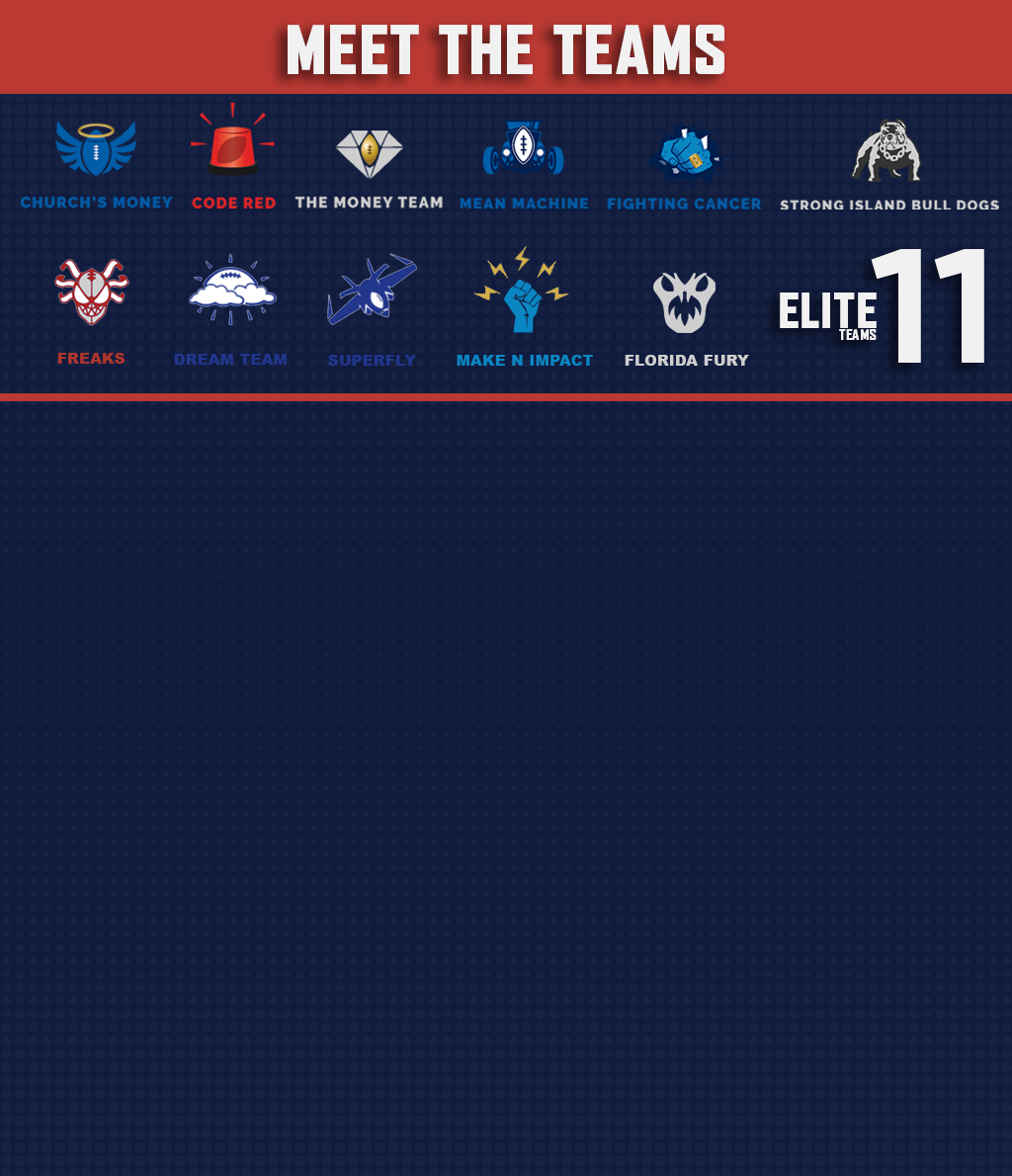 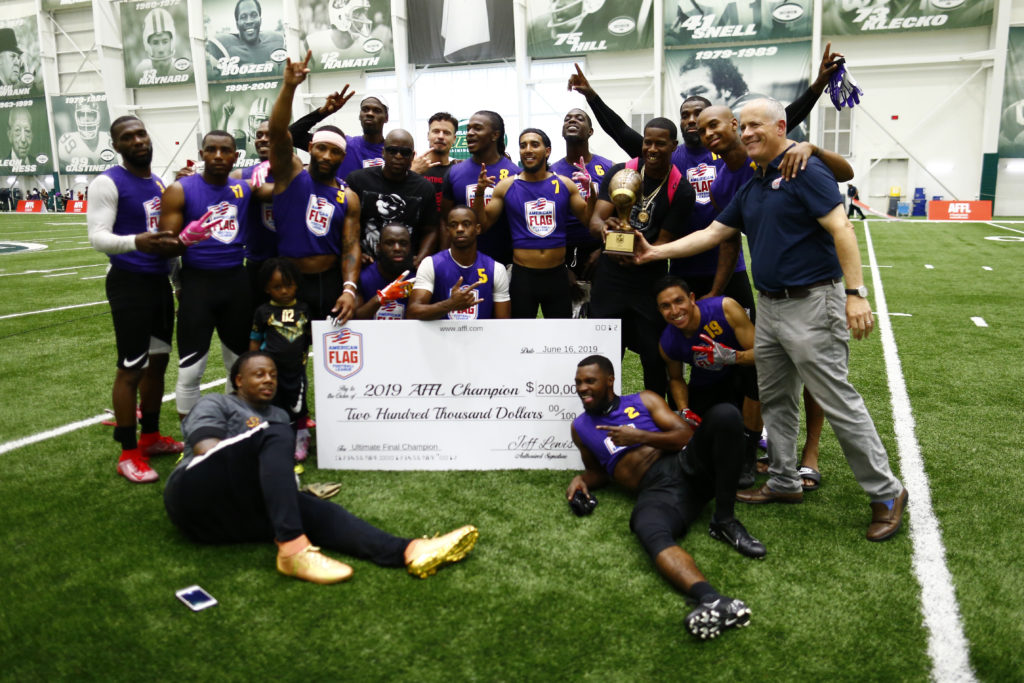 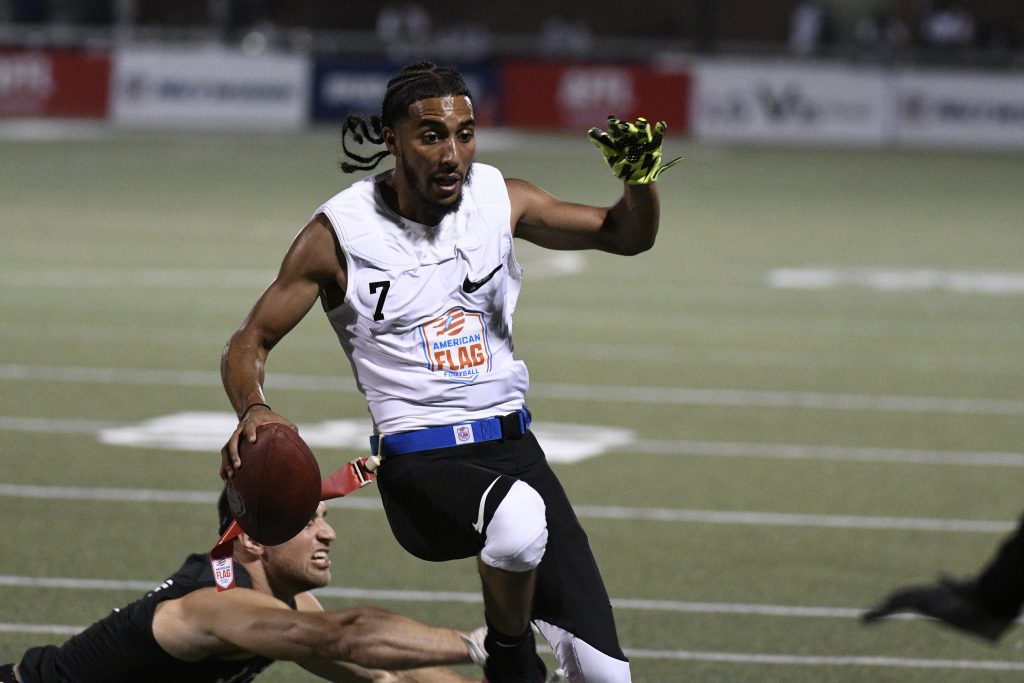 Fighting Cancer became a team when some of their players decided to part ways from a former team. Overtime and after many wins, they earned the respect of the flag community and were considered the best 7-man screen team. They won five straight world championships. Through traveling, they were able to make rivals that became friends/family. Then, there was an 8man contact tournament for the most money that was ever given for a flag football tournament. Fighting Cancer made some phone calls to put together a great 8-man team to win the money. They took the best 7-man players in the country, and instantly all gelled and worked great together as a team. They went undefeated and won the tournament as the other teams didn’t know how to adjust to what they brought to the game.

As two-time AFFL Champions, all eyes are on Fighting Cancer! Will they prove all good things come in threes? Or will they succumb to the pressure.

With many players switching alliances, it will be interesting to see how these back to back champs will fare with so many new faces.

The Texas Money Team (TMT) was created in the heart of Dallas, Texas. The team is composed of players who were a part of different travel teams around the area; when the AFFL gave the country the chance to compete for one million dollars, they decided to stop battling each other and come together for one common goal. TMT has been a dominant force throughout the history of the AFFL, and this year they are back and ready for revenge. In 2018 they made it to America’s Championship vs Fighting Cancer where they succumbed to the defending champs, 36-25. They returned in 2019 as America’s favorite to win, and that they did with a 46-20 win over Dream Team in America’s Bracket. It was at the Ultimate Final where they lost to, the now Pro’s, Fighting Cancer, for the second time.

Will 2021 finally be the year the Texas natives are able to prevail and claim an AFFL title? 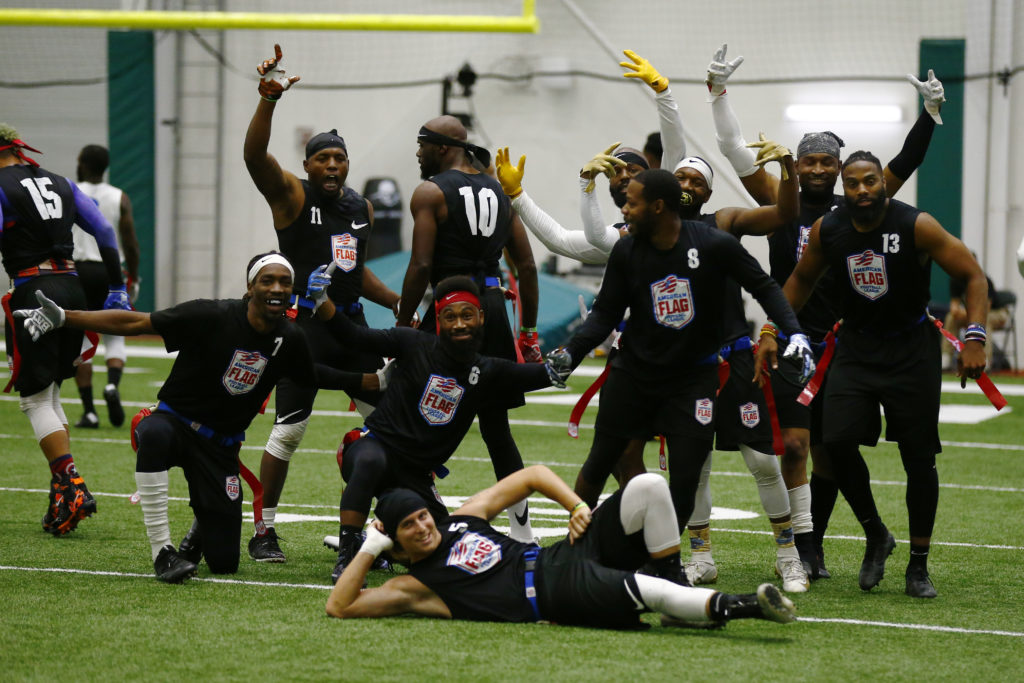 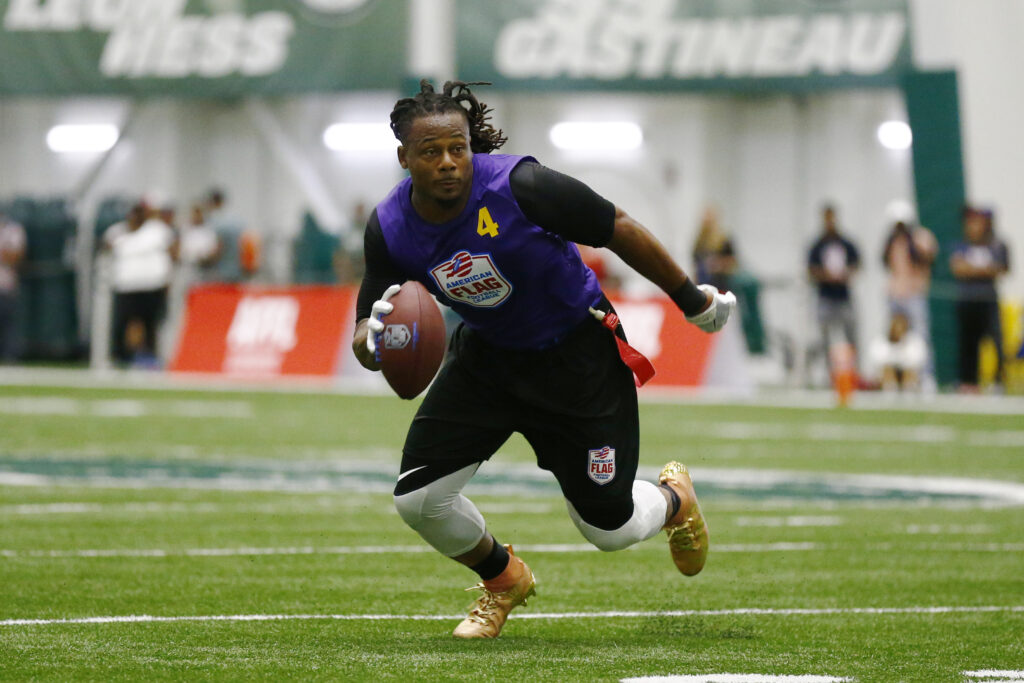 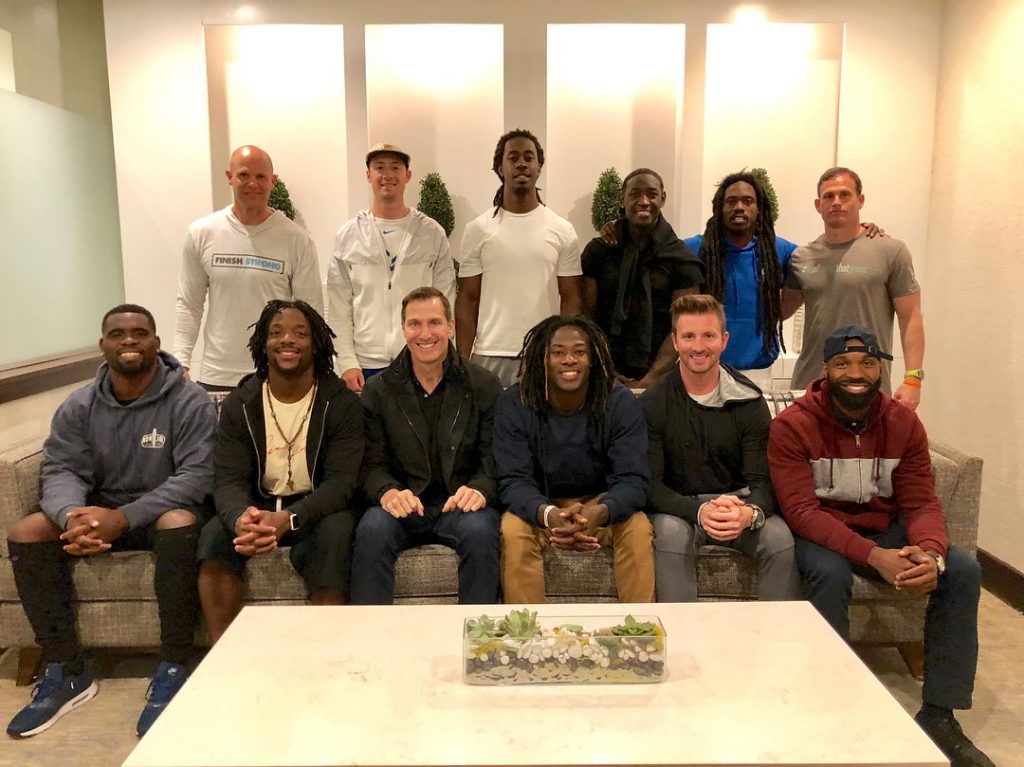 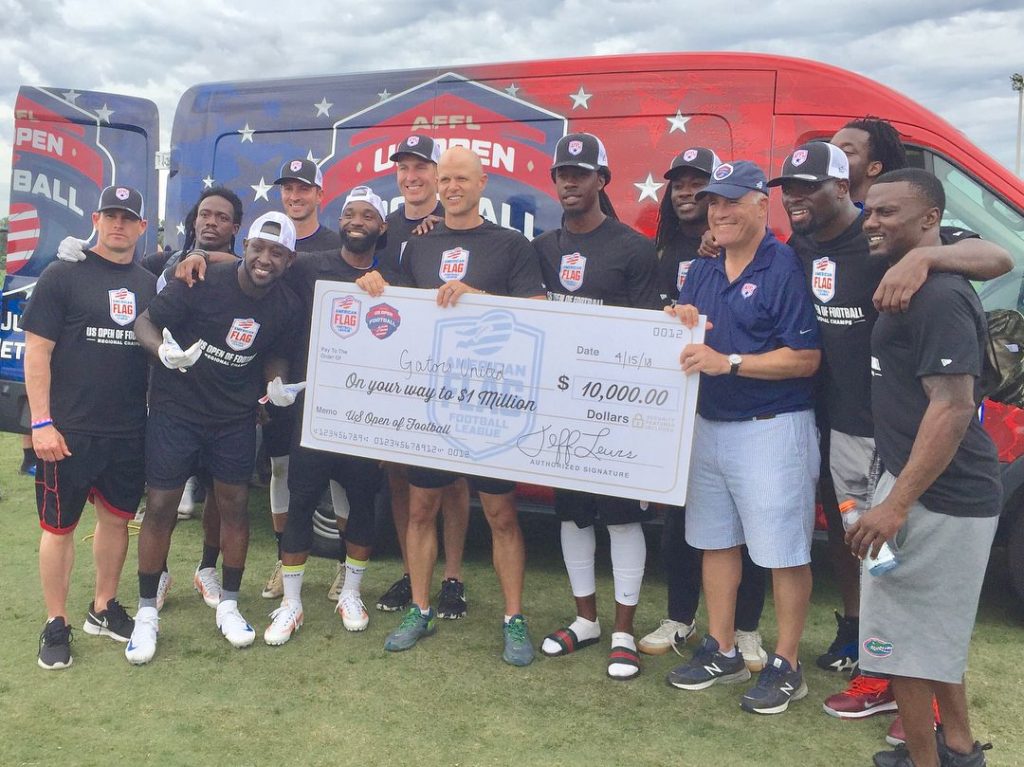 The team was started in 2008 by Heisman Trophy winner Danny Wuerffel and was given the name Gators United. The team was filled with former Gator players, many of whom had played in the NFL (Major Wright, Chris Doering, Ahmad Black, Brandon James, Frankie Hammond, Travis McGriff) and three flag football players (James Di Virgilio, Adam Langston, and Jerome Lemon), all of whom currently coach the team. In the 2018 AFFL season, Gators United lost in the opening Round of 32 to XFlag Football. In 2019, the team expanded its reach beyond the Gator Nation and was renamed the Florida Fury. This squad featured Danny Wuerffel, Michael Vick, Jason Avant, a host of other former NFL and college players along with some of the top flag football players in the country. Playing the AFFL pro division against the defending champions Fighting Cancer, Florida Fury held a 34-19 lead late in the second half, but Fighting Cancer made a comeback for the ages and won the game in Double OT. The 2021 edition of the Florida Fury is once again led by Danny Wuerffel, and features a roster heavy with former NFL and college football players, along with some of the best flag players, all seeking the same thing, an AFFL championship.

The Strong Island Bulldogs have been around the flag world for over seven years. They dominated the state of New York before team captain, Christopher Bute, decided to have the team travel nationally. The Bulldogs’ domination continued at the national level, and the team took the flag world by storm. After winning multiple national championships (i.e. 2018 5man A National Champions, 2019 9Man A National Champions, 2019 Top Gun National Champions), the Bulldogs have made a name for themselves and are filled with some of flag football’s best talent in the world. In the AFFL’s 2018 inaugural season, the Bulldogs finished in the top 6 and were eliminated in the quarterfinals. The Bulldogs had a similar finish in 2019, as they advanced to the quarterfinals, defeating an impressive Sik Wit It team 34-19 in the Round of 32, before falling short to Ultimate Final Runner-Up TMT 26-13.

Will the Strong Island Bulldogs be able to finally overcome their quarterfinal hump in the 2021 tournament and claim the crown? 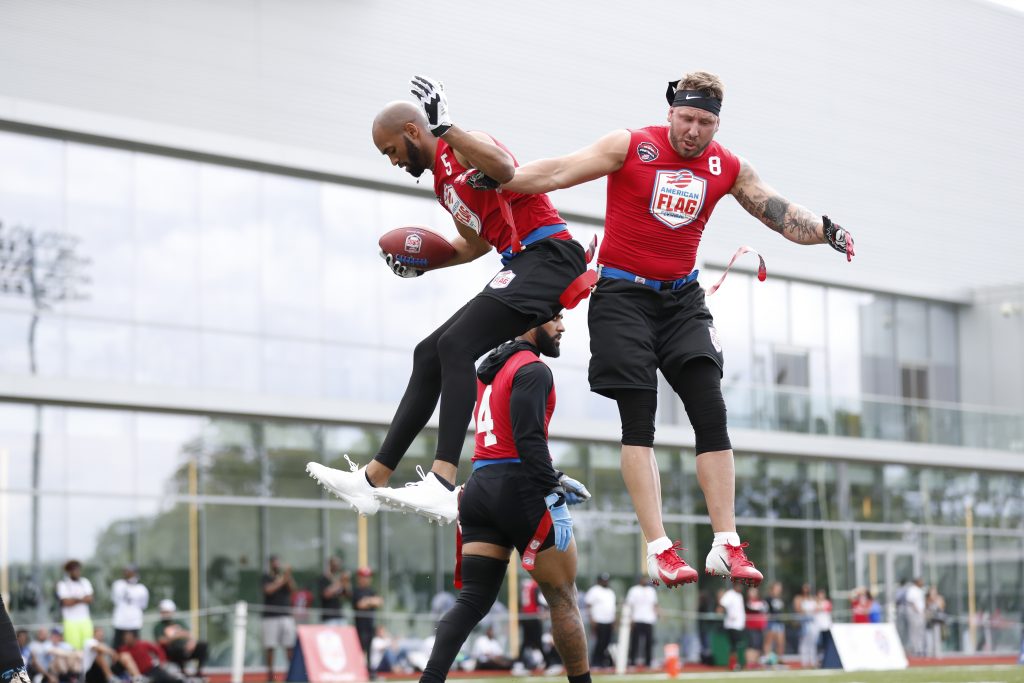 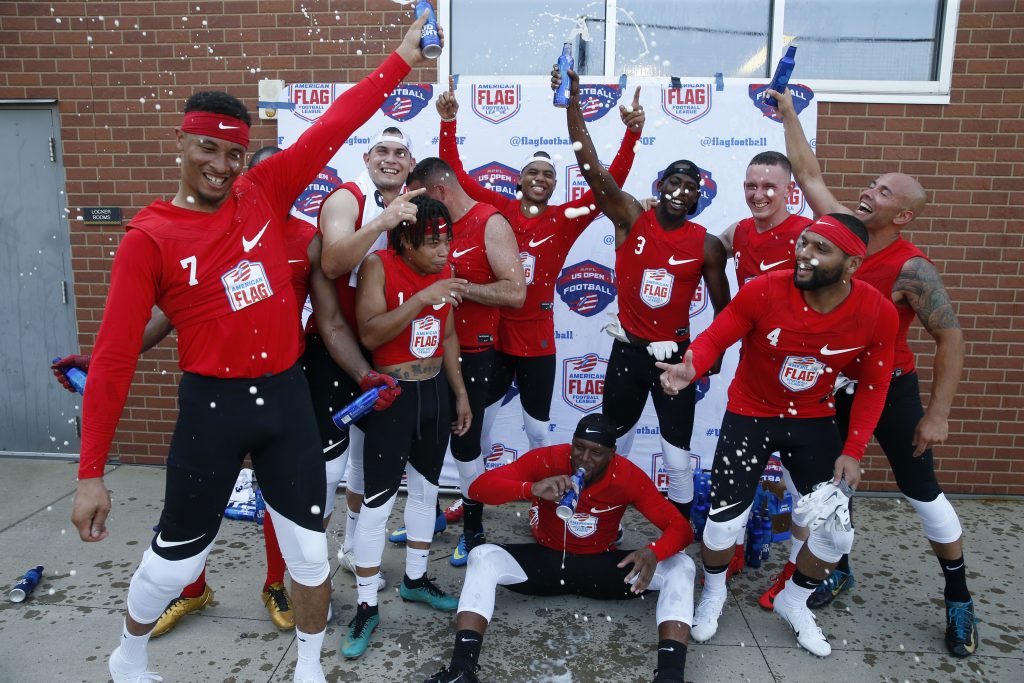 Super Fly aka Kings of Florida

SuperFly is captained by flag football great John Fletcher, who also leads and manages the Florida powerhouse that is Kings of Florida (KOF). KOF has claimed multiple 7man, 5man, and 4man national titles. With many star-studded players from Kings on Fletcher’s AFFL roster, SuperFly is sure to be a top contender for the championship title. In the AFFL’s 2019 season, SuperFly qualified for the Round of 32 before being exited early by the Fort Worth Rams, 32-29.

Will Fletcher and the rest of his SuperFly squad be able to redeem themselves from their 2019 shortcomings and achieve AFFL greatness? 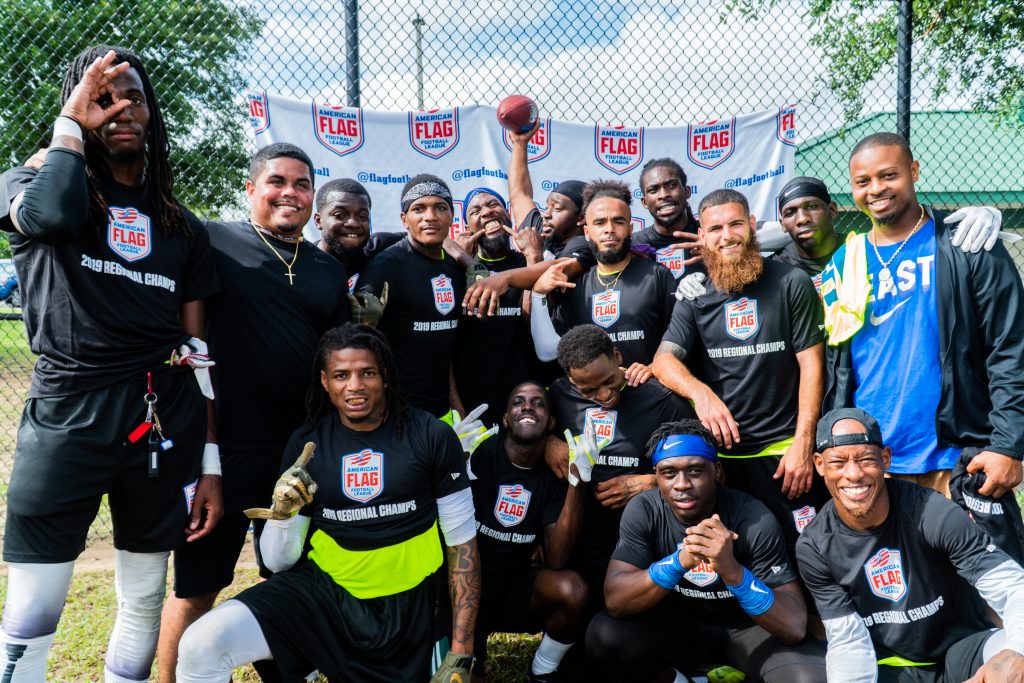 Code Red is a notable 9-man powerhouse squad that decided to step into new waters and put in a team for the 7v7 AFFL style from the jump. Code Red has been around the AFFL block. They started strong in 2018, making it all the way to the Semifinals. Along the way they beat top teams such as Mean Machine (27-8), The Ducks (22-0), and Athletes (31-20). Their winning streak came to an end when they lost to TMT, 14-13. In 2019 Code Red returned with less luck than their last run. They were defeated in the quarterfinals, 47-35, by an emerging team, the Freaks. QB Matt Demarteleire and Code Red hope to turn it around this year and compete for a championship.

The Freaks debuted at the 2019 Baltimore Regional and put the Freak in Freaky. The team was made specifically to play and win the AFFL by QBs Patrick Alley and Eric Holliday after watching the success of the 2018 season. As a brand new team out of Texas, they expected to see themselves as a top threat despite not being as experienced in the format. New to the scene, the Freaks showed the world that knowledge is power, even on the field. They were known for taking repeated risks and succeeding with onside plays. After success in Baltimore, the Freaks defeated a strong Code Red team 47-35 in the Quarterfinals before falling short in America’s Bracket Semifinals to TMT, 43-30. They have continued to play, work, and dominate together and expect nothing but success this 2021 Season. 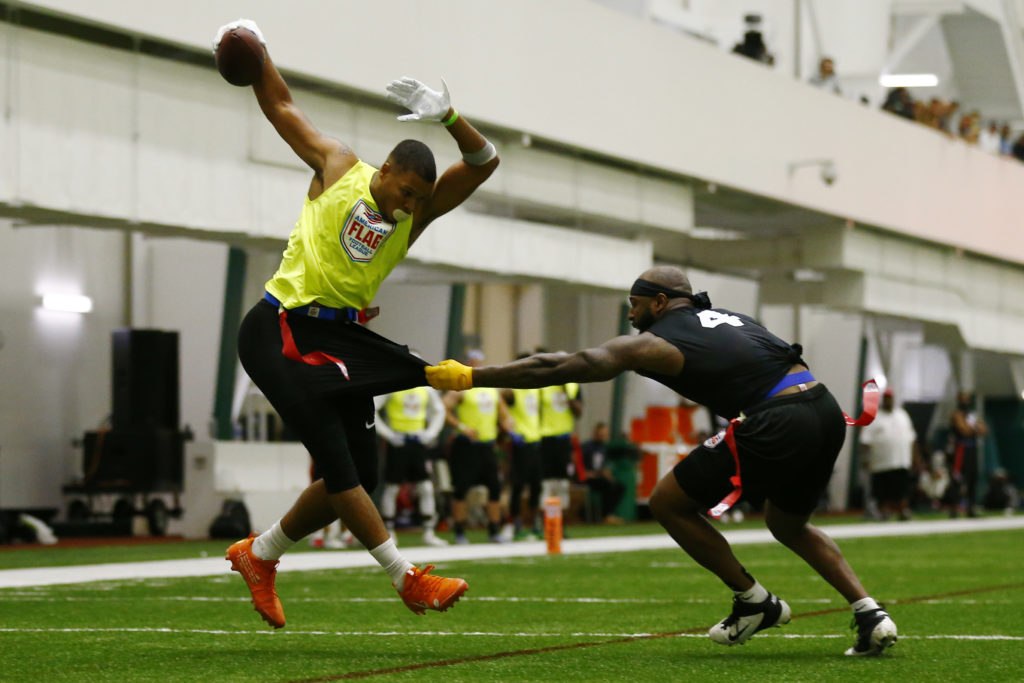 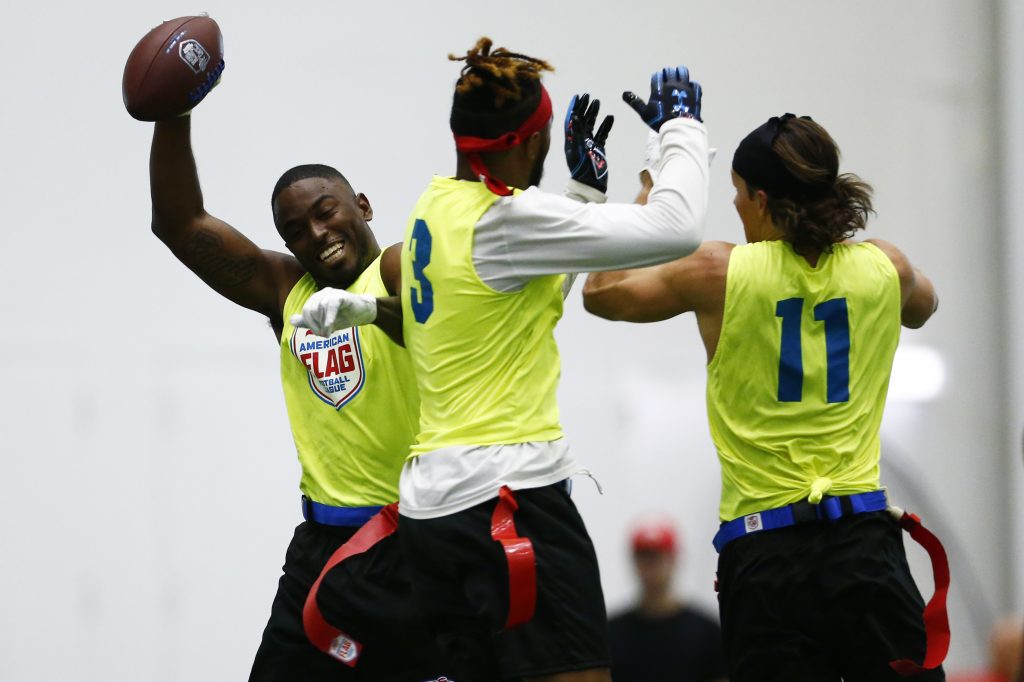 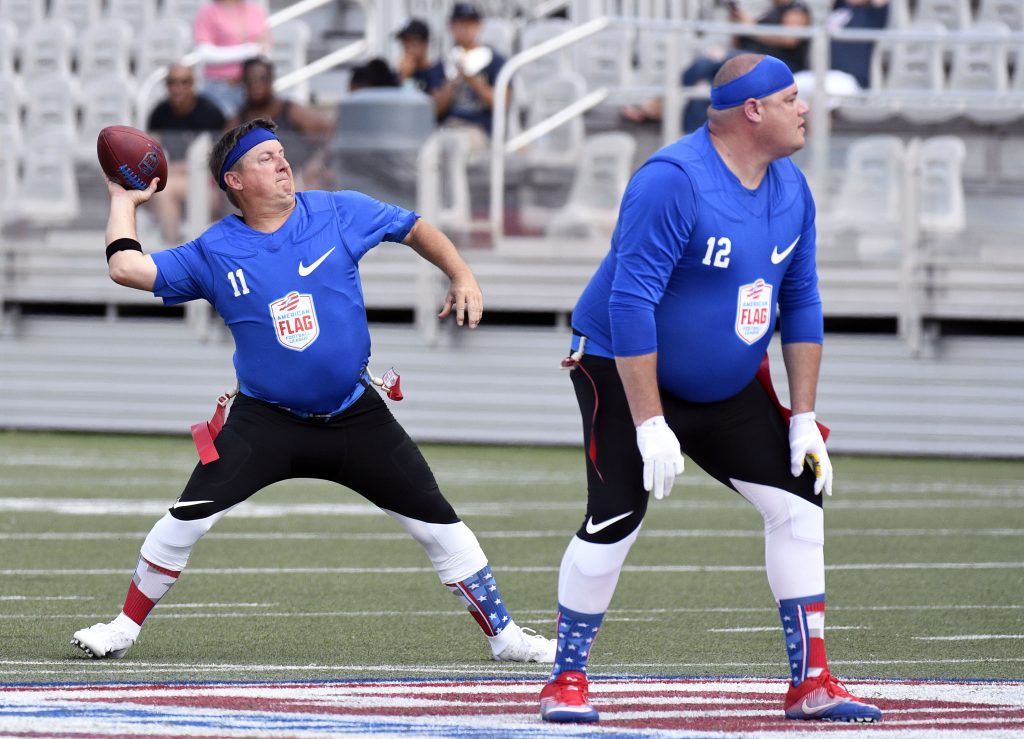 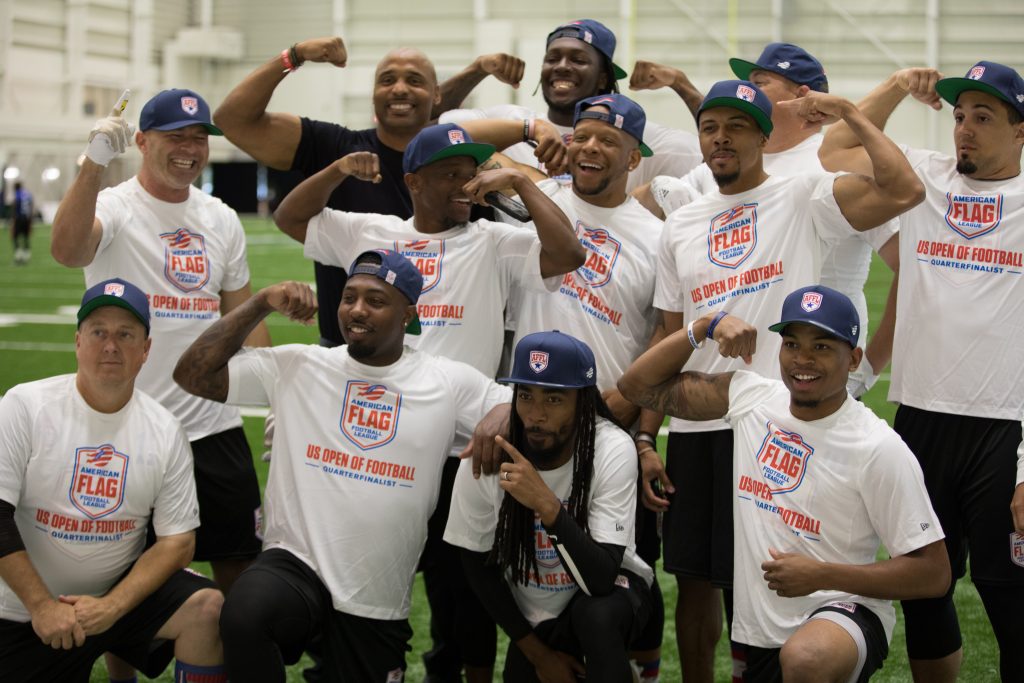 Mean Machine was started by the Old QB, Chris Hughes, in the 1990s. Their team name originates from the first version of the movie The Longest Yard. The roster of players has changed over the years, but the name has remained the same. The team has won numerous Collegiate 7man tournaments, 8man tournaments, and was known for having one of the best coed teams in the 2000s (USFTL Coed National Champions 2009, 2008, 2009). Mean Machine established themself as a force to be reckoned with in the AFFL’s inaugural season, beating elite opponents such as Dream Team and Athletes prior to losing to Code Red in the quarterfinals. In the AFFL’s 2019 season, Mean Machine did not fare as well as in their first go-around. The team narrowly lost in the opening Round of 32 to Church’s Money 43-40. Will the Old QB and the rest of his veteran squad be able to bounce back and make a statement in the AFFL’s third season?

For the AFFL’s 2021 Tournament, Make It Happen Players (MIHP) has collaborated with teams Impact and Spartans as Make N Impact in hopes to win the championship title. The team Make It Happen Players (MIHP) was started in 2013 when the team sponsor, Pops, decided to play flag football with his son. The father-son duo began to recruit their most talented opponents to play with them in the Florida Flag Football League (FFFL). This led them to players like quarterback Josh McGregor, an offensive general who has led them to several state titles. After falling short to Dream Team 26-21 in the Round of 32 in the 2019 AFFL season, MIHP decided to go the super team route and combine the best players of three dominant teams into one unit.

Will this be the necessary change to lead the Floridians to AFFL glory? 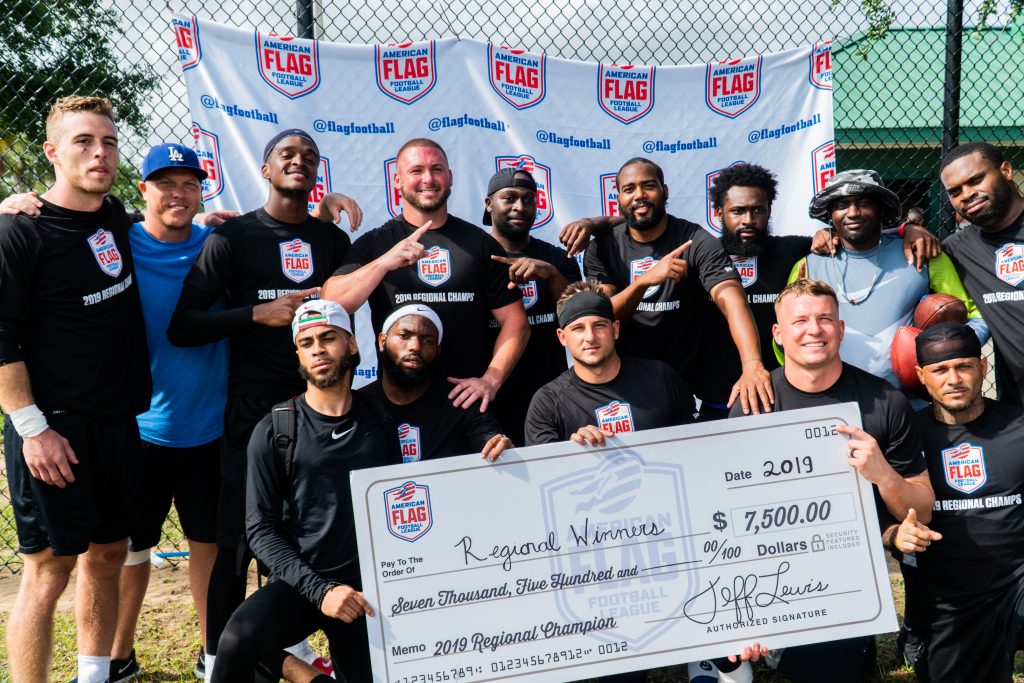 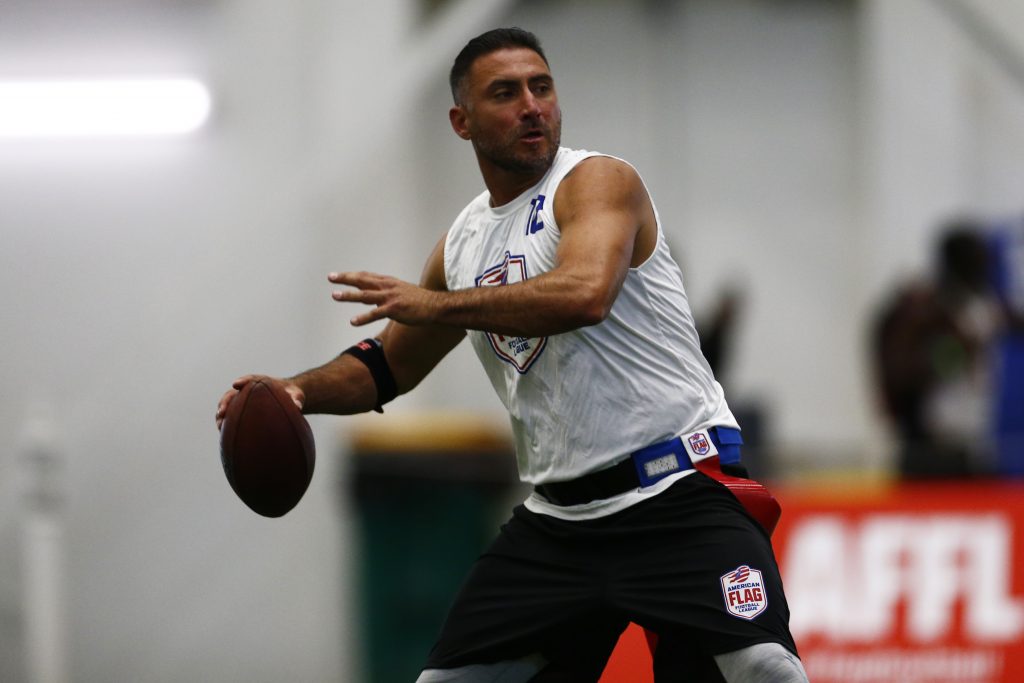 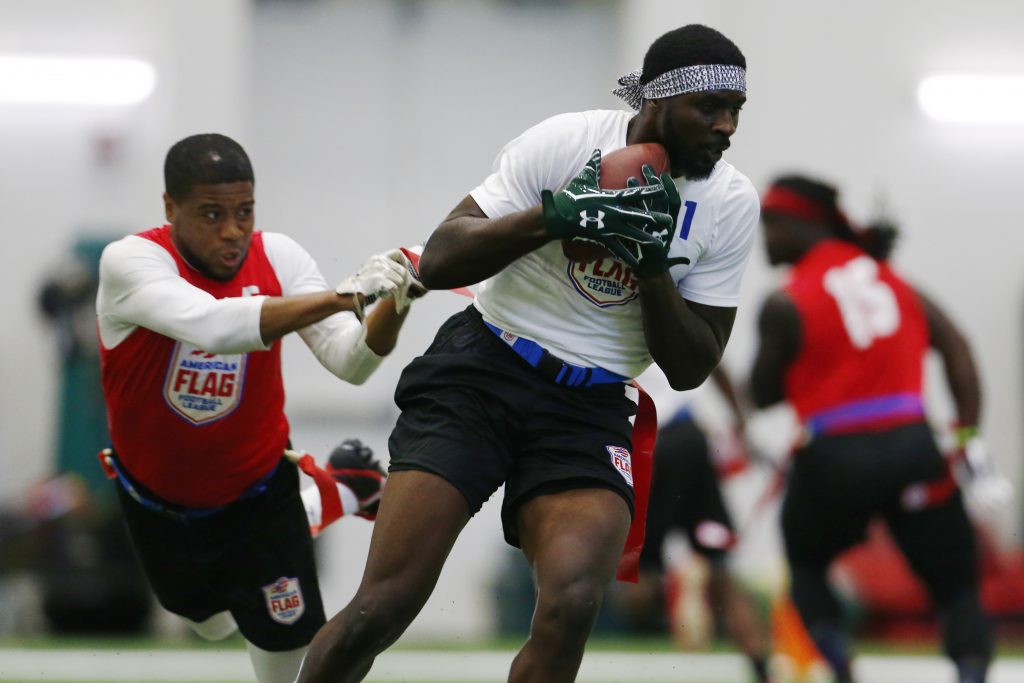 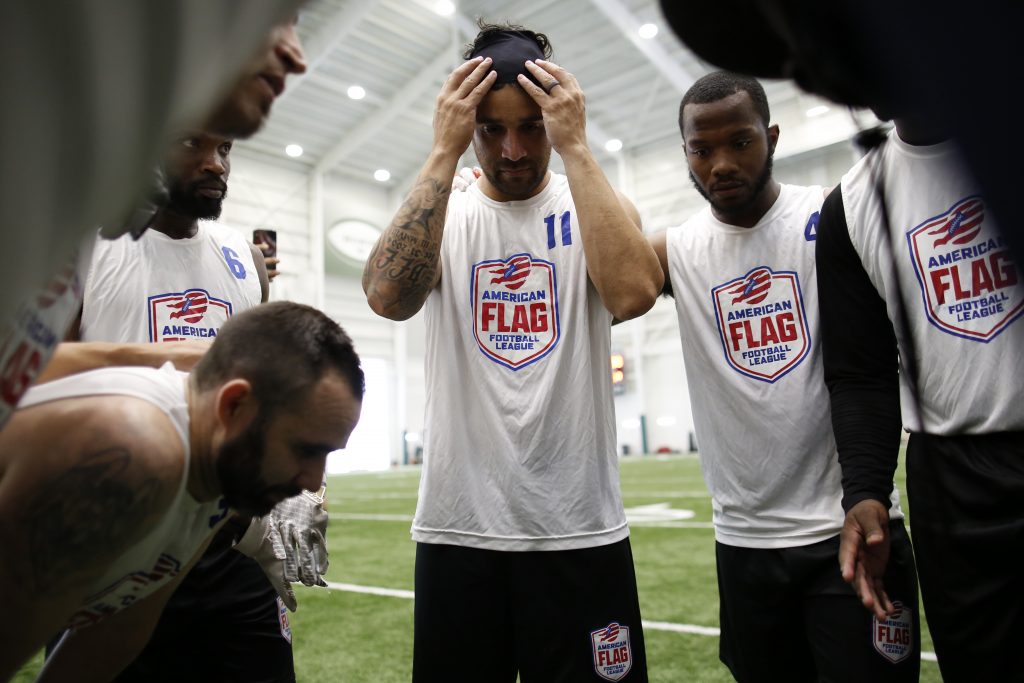 Dream Team originally started with the Urias family (Jerry Urias), and was composed of all brothers and cousins. The family grew up in the City of El Monte, which is a few minutes outside of Los Angeles. The team name originates from Jerry’s late brother, Hector Urias, who came up with the name because he said it was his dream to play with all three Urias brothers on the same team. After a few years, the team decided to take a break. Following two years of not playing, Chuck Lozano and Jerry Urias brought the Dream Team back with players old and new, and now have been playing together for close to 15 years. Dream Team has picked up more players from different areas such as Compton, Long Beach, Orange County, San Diego, Las Vegas, Riverside, and Miami. Dream Team is more than a team. It is a family. They attend family parties, weddings, and travel the country together while casually winning several championships in multiple formats (8man, 4man, 5man, and 6man) along the way. In 2018, Dream Team made it to the Round of 32 before losing to Mean Machine, 29-12. With the taste of winning, competition, and a large stage, Dream Team did what they had to do to come back better and stronger.

From Round of 32 to the 2019 America’s Championship, Dream Team made a name for themself. After their 42-0 blowout vs Church’s Money, they fell short to TMT, losing their shot at the Ultimate Final.

Will they be able to finish the deal and earn a championship title in the 2021 season?

Curry Money is a combination of two powerful West Coast teams, veteran AFFL squad Church’s Money and the Curry Bombers. In the AFFL’s first season in 2018, Church’s Money advanced all the way to the quarterfinals. They lost to TMT, who was the runner-up of America’s Bracket that year. In 2019, Church’s Money was able to advance even further in the bracket. They defeated notable teams such as Mean Machine (43-40) and the Fort Worth Rams (26-21) before falling short to Dream Team in America’s Bracket Semifinals.

Is merging teams the pivotal power move that will push Curry Money to the final, and ultimately an AFFL championship? 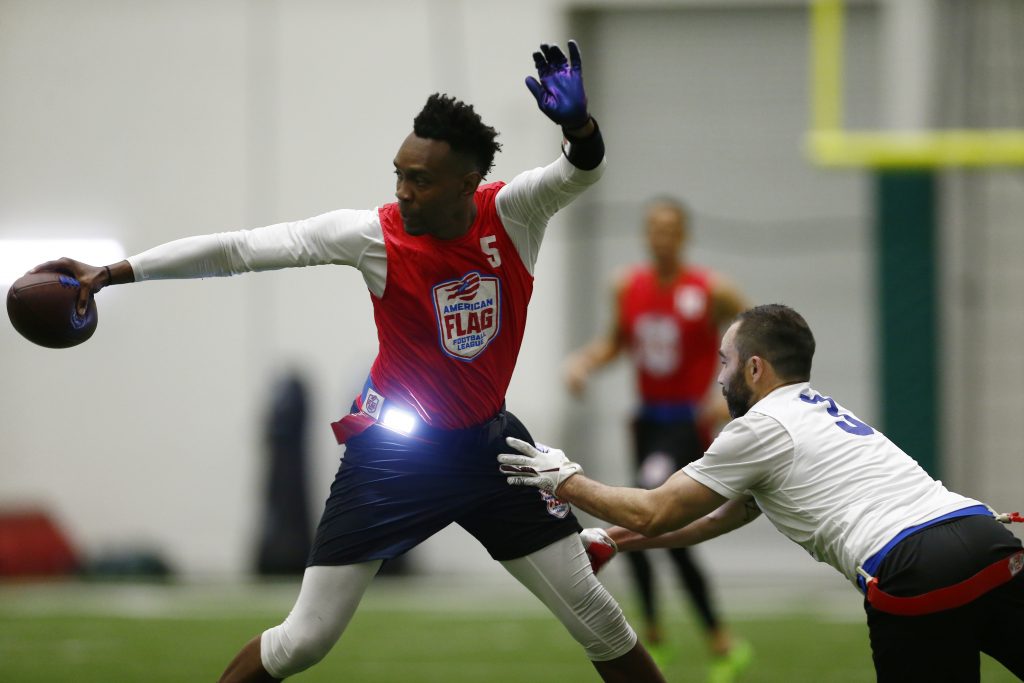 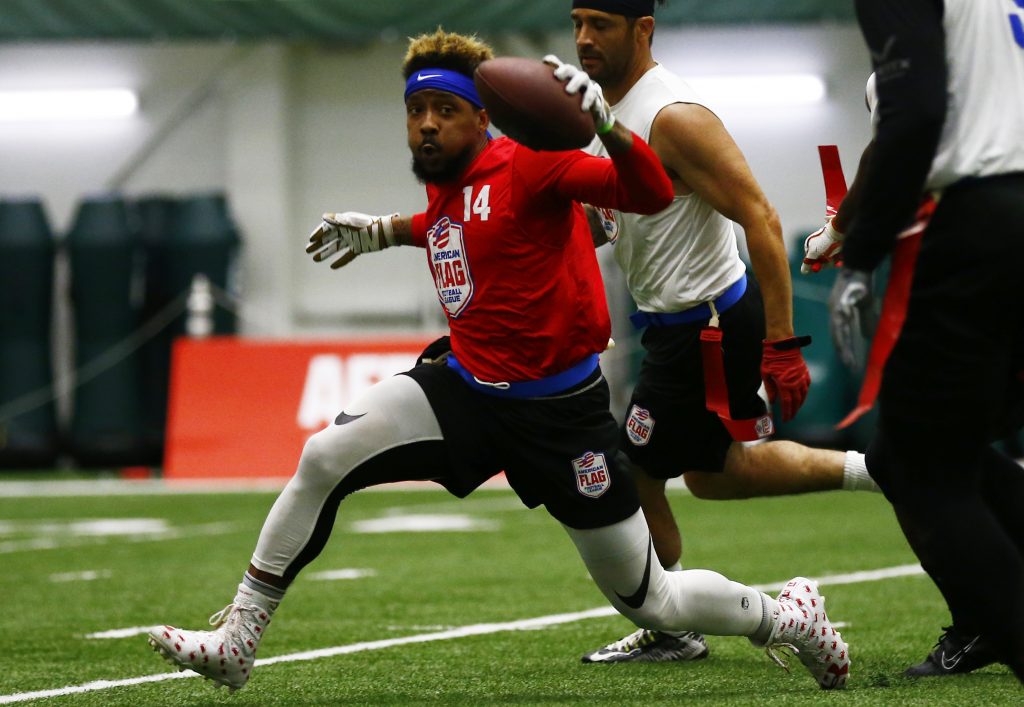